What’s the best toner for your skin? – All Pixi Tonics, Reviewed! #PixiPerfect

Hi, beauties! Some weeks ago, Pixi Beauty kindly sent me a box with three mini sizes of their range of toners (you probably know the Glow Tonic already). I wanted to test them for a while and let you know my thoughts on each and every one of them, mainly because I’ve been using the Glow Tonic for ages now, and I was very excited to try the new ones: the Rose Tonic and Retinol Tonic!

*The products mentioned in this post were given to me for free, but this post isn’t sponsored in any way. As always, these are my honest thoughts, experiences, and opinions only. Products work very differently for everyone. This is meant to be a guide for you to get to know these products a little more and get an idea of which can work better for you through my experience. 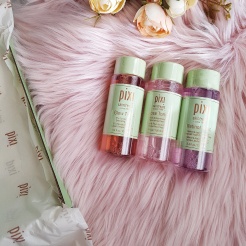 The original Glow Tonic is Pixi‘s most famous product, and probably the most beloved of its kind in the beauty community. With a reason!

Its formula, which refreshes and cleans pores by taking away the excess of oils and impurities, is enriched with 5% glycolic acid and aloe vera, which hydrate the skin while taking care of it.

It promises to help the skin be more “balanced, soothed, radiant and prepped for makeup application”, and it’s indicated to be used in the AM or PM.

Who will it benefit more? This product is suitable for all skin types. It works amazing for combination skin, especially in the summer, but it’s also a staple for many people with dry skin. It will clean the skin thoroughly and get rid of the excess of oil and sebum, while also making it look more radiant and fresh. I highly recommend using it at the end of the day because we carry a lot of dirt from pollution, among other things.

This tonic was the very first one that I tried and contented me enough to buy more of it. I saw real progress in my skin, which began to look much healthier after a few weeks of use. I’ve been using this product on-and-off ever since because I hardly ever commit to a single product -testing for the blog being the main reason, but it still is the first one that comes to my mind whenever someone asks me which one they should give a try. It works very well!

However, after trying the newest additions to the Pixi family I’ve realized that their range can give solutions to more skin concerns than I initially thought. I still recommend this product 100%, but if you have sensitive skin, there’s one that might work even better for you.

After two years of playing with makeup non-stop, my skin went from really oily to combo/oily with a bit of dehydration (especially in the winter). I also picked up on some sensitive skin problems, and my skin reacts badly to certain products.

Pixi‘s Glow Tonic was perfect for me three years ago, but now that my skin is getting pickier with what I put on, I realized I could no longer use it too frequently because my skin wasn’t reacting as well as before.

Their Rose Tonic, on the other hand, is very gentle with the skin and provides similar results to those of the original formula.

According to Pixi‘s website, the Rose Tonic “helps to tone, balance pH, minimize redness and calm skin“. This Rose Hydrosol-based toner is filled with natural ingredients such as roses and elderflower, which rehydrate and refresh the skin naturally.

Who will it benefit more? Although the brand claims that this product is suitable for all skin types, I don’t think I’d recommend it to people with oily skin. It may work, but I feel like the Glow Tonic is the best option out there for that specific concern.

I’ve been using it for a couple of weeks now, in the morning and before going to sleep. My initial impression was -and still is- really good. I like this formula way more for my skin right now because the weather in Barcelona is pretty cold at the moment and I need that extra hydration. I’ve also noticed my skin looking fresher and more luminous than before, and it has definitely calmed it as well.

Having combination skin, I was afraid this product would break me out or make me oily, but rather, I’ve found that it normalizes the hydration levels of my face. However, I did miss the exfoliating effect of the Glow Tonic and I considered they could work really good together, which is why I’ve recently begun to use them that way. I use the Rose Tonic on a daily basis and every two or three nights, I switch it for the Glow Tonic.

This is the only tonic I haven’t tried regularly yet, which makes it a bit of a mystery for me, but I’ve used it a couple of times with the previous ones and I found that the formula was quite similar in how it treats the skin; it’s smooth, gentle and refreshing.

The Retinol Tonic has a different purpose compared to the others. It’s a “potent youth preserving tonic” that helps rejuvenate the skin and provides it with a natural glow. Some of the main ingredients include very powerful antioxidants and botanicals that replenish the skin for a “smoother, softer appearance“.

Who will it benefit more? Pixi doesn’t say who this particular formula is made for on their website, but it’s assumed that it’s indicated for mature skin. It’s supposed to reinvigorate the skin, reduce fine lines and it’s sensitive skin-friendly.

As I said at the beginning, I haven’t had the chance to fully try this product alone. I’ve added it to my routine two times so far, but I don’t think it’s going to have a big effect on my skin anyway because I’m only 21. That being said, I do have some fine lines I’d love to get rid of, which is why I’ll probably put it to the test soon, and I will do an update when I do! 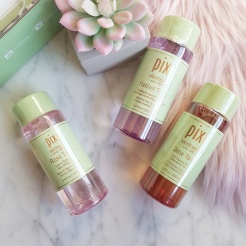 I feel very, very, very fortunate and humbled that Pixi gave me the chance to try these products. They’ve been so kind to me lately, and although that might sound off as if I’ll say I love everything just so they send me more -let’s be real, a lot of people do that-, I do want to remark that these are my opinions only and that I’ve always loved the brand and people who follow me know that.

They’ve recently launched Vitamin-C and calming Chamomille-based (“Milky“)Tonics, and I can’t wait to try them as well! I’m waiting for them to be released in Spain, but I’ll probably give in and give their official website a try because the shipping was very fast.

And that’s it for today, guys! I hope you enjoyed this post and found it useful. I think it’s great that this range of tonics is diverse and that all of them can be used by people with sensitive skin like me. That’s one of my biggest concerns when it comes to this type of products and that’s why I’ve always raved about the Glow Tonic!

If you had to pick one tonic from Pixi‘s, which one would it be? Given that I can use the Glow Tonic now and during the summer, but the Rose Tonic is better for me in the winter, I’d probably pick the first one. However, I plan on using both together from now on!

Before you leave, don’t forget to follow me on social media. I try to be more active there, and it’s an easier way of seeing my follow-ups and updates! ♡

5 responses to “What’s the best toner for your skin? – All Pixi Tonics, Reviewed! #PixiPerfect”